Around a year ago, I had the daft idea to create some nerdy JSON-game. I had good fun thinking about some concepts, made some notes, and that was about it. Until now that is. The game: It’s coming… It has already started. To keep me focussed, I will keep a journal of the creation, and you’re reading the first part.

I got the ideas from series like the Brent Simmons’s Vesper Sync Diary and Jon Skeet’s Reimplementing Linq to Objects. I found them enjoyable; a bit of a nerdy soap opera. And now is the time for me to get of my comfy sofa and produce some soap of my own.

The idea of the game: JSON tokens are coming in, and you need to place them correctly. The initial form of the game will be Tetris-like with your head on your right shoulder: the tokens come in from the right and go to the left (alternative gravity you can think). However, this form might change from level to level (I’m thinking of the partial JSON document as a starship, crashing into JSON stars/tokens as it cruises through the JSON universe).

The first step is to create some user interface mockup. A guy gotta start somewhere. My weapon of choice is HTML/CSS. At the top we have a dashboard providing some game details. Unformatted JSON will do for now. The playing field (where the partial JSON is) will have a fixed width, while the height might grow during gameplay when tokens are inserted between lines. 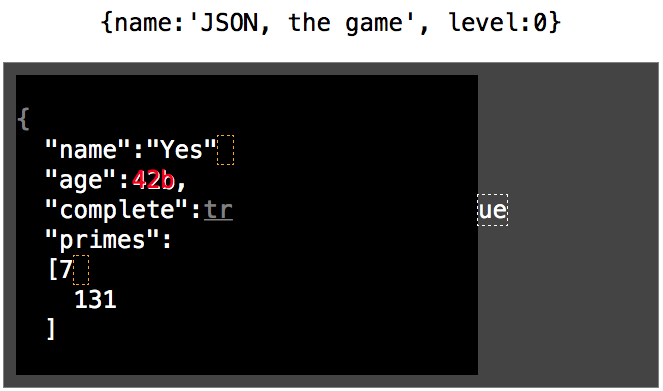 Positioning is done with the em and ch CSS units with a position relative/absolute container-combo, so I can position things absolute within the relative container. Every character is one ch and every line is one em. One little problem though: em is font-height, not line-height. And a line-height of 100% just doesn’t look right. But there is no such thing as a line-height unit. (Or is there?) This is easy fixable with a calculation, but line-height will appear in multiple places in CSS.

Also some color coding needs to be added, so we can identify unbalanced grouping tokens, missing separators, incomplete tokens and downright errors. That’s why I’m not using a pre-element. I don’t have a definite idea about gameplay, but some ideas come to mind. An obvious solution for an error would be “Game over”. This can also be postponed by counting “lives”. The error will vanish and you loose a life. Or an error could be cleared with the incoming JSON token \b. That choice will depend on the level. But I digress.

This is not all markup we need (we will need a dialog-box, for the start and end of a level), but it will do for now. I put the source-code on GitHub, and every instalment will point to a commit so you can see how this game comes to shape. You can also “run” the game here (nothing to play for now).

I hope to find a good balance between enjoyability, a bit of fun and some technical remarks. And I like to hear your thoughts on Twitter.

The next instalment will be about moving those incoming tokens.